Ezekiel Eyes is proud to be a family owned and managed optometry practice that is now in its third generation.

The first optometry practice, “M Ezekiel and Sons”, was founded in 1916 by Elias (Ellis) Ezekiel and his brother Abraham (Abe). They also had a second practice, in Batavia (now Jakarta).

In 1942, Ezekiel family members were refugees of the war and journeyed to Fremantle. When the war was over, they returned to Singapore and Ellis Ezekiel rebuilt the practice on Battery Road.

In 1952, race riots in Singapore caused the family to sell the business and move to Perth. Ellis started a practice on the first floor of a building on the corner of King Street and St Georges Terrace then later moved to the ground floor shop front.

Ellis’s son, Donald Ezekiel, graduated in optometry in 1957. In 1963 he married and went to London, where he completed an advanced contact lens degree. Donald returned to Perth and worked in the family practice which, by then had moved to the Hay Street Mall.

In 1971, Donald started his own practice on the first floor of a building in Kings Park Road, then, in 1973, moved to Outram Street, West Perth.

Also in 1971, as he couldn’t source the contact lenses he wanted, Donald began designing and making contact lenses for his patients. He started his own contact lens manufacturing company called WA Contact Lens Manufacturers, then, some years later, changed the name to Gelflex Laboratories, where he continues to research better contact lens designs.

In 1989 Donald’s son, Damon, graduated in optometry from the University of New South Wales. Damon now runs Ezekiel Eyes, where he continues the high standard of service that his father and grandfather provided. 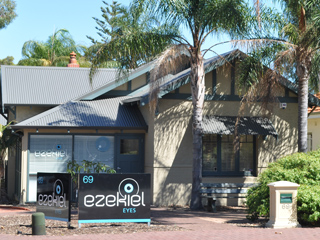